Shuffle is a Benefactor's League superhuman, and friend of the protagonist in Electrophoresis. Her real name is Alex Mio. She is also dating Harlequin. An avid gamer, Shuffle considers her ability akin to that of Mega-Man, or Kirby.

Shuffle's ability is the mimicry of powers, from a varying distance. Upon assuming a power, she also assumes the power's side effects and, if present, changeling traits for the duration of her mimicry. She is one of very few superhumans whose power does not have an associated color. She must be near someone to copy their power, and if she copies too many in a short time she begins to get nauseous. 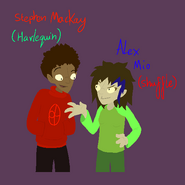 Shuffle and Harlequin in civilian outfits.
Community content is available under CC-BY-SA unless otherwise noted.
Advertisement