Dancestor is the Element Fragmenter.

Samira Lane (Sam for short) is the foremost protagonist of Chiasmata, a nice girl in her twenties from the British Isles. After awakening in The Location, Sam soon found herself swept up in the mystery and intrigue of the Location.

She has the power of the Coruscant Shaper, granting her the ability to project and manipulate electricity. She is capable of producing at least two Gigajoules of power in one sitting before side-effects set in.

Sam is highly energetic. She is often the character to come up with new ideas to investigate something (which sometimes gets her into trouble). Sam is not a girly girl - she displays a more tomboy-like personality. She and Daniel occasionally get into disagreements over small things, usually due to differing opinions. No matter what, Sam will find a way to end the quarrel and have a good laugh with her friends. At her very core, Sam knows what it means to be a true companion and has a heart full of compassion. She is loyal and loves to help others. Sam is persistently optimistic and determined to overcome any obstacle she faces in her time in the Location. Regardless of what role she plays while trying to get out with her friends, she always has a sense of humor.

Her role in the story

Sam is the first protagonist we get to know. After discovering her power, she meets up with Aidan and gets into an argument with Daniel. She and the other three hear a scream coming from Bonnie around the corner. Sam helps her and she introduces herself too.

A door opens, showing the puzzles needed to be solved. There, she first discovers her side effect.

After they meet as a group, Sam gets to team up with Daniel, where they accidentally awaken Arbiter. When they are gathered by Archivist again, she ends up in a strange form of the Location. When Ash jumps through a window to her room, the window shuts down, leaving her and Sam trapped. They solve a puzzle involving both of their powers and allowed Archivist to appear.

Speculation about her past

Sam is implied to have two mothers, and is adopted. Her hobby was making robots in her mundane life. However, she was also aware of the existence of Cold Lights and knew at least one superhuman. To add on this, the eye on the slab reminds her of something in the back of her mind. It is very possible she knew of the origin of superhumans and was placed in the Location because those were things she wasn't supposed to know. Her flavour quote at her civilian reference is 'I played with thunder', which is of course (next to being a bit of a pun) a metaphor for doing something dangerous, so this might be tying in to her forbidden knowledge or living a dangerous lifestyle. Her dearest memory is a birthday party.

Sam in the PMMM fan universe is a Puella Magi. Her information sheet is to be viewed here. The wish she had before the Cold Light hit her was: ‘I wish I could make a change in a way.’

This Sam 'likes asymmetry, hence why her outfit only has one pocket instead'.

Sam in her civilian form.

An early version of her civilian form.

Sam as she appears in the PMMM fan universe. (outdated) 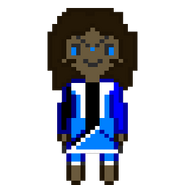 A pixel of said version.
Community content is available under CC-BY-SA unless otherwise noted.
Advertisement