Omar Waseem is the fourth character to be met in the Prokaryote chapter. He has the power of the ?????? granting him the ability to make fire. His description on the official cast page reads 'Firey temper?'

Omar is a frenetic guy who is more tightly wound than the other Prokaryota. He thinks, speaks, acts and reacts quickly. He may not be the most agile or graceful of the group, but he is rather determined. Omar tended to undergo a "panic attack" in nearly every panel before he was introduced. His tendency to worry continues to be brought up throughout the comic, but he does not panic as frequently in later panels.

His role in the story

Omar is not seen in the Prokaryote chapter before all of the other three do, but he started out fighting with Leonardo. He apparently got frightened and ran away. Then, he set fire to the rest of the building, triggering his side-effect, leaving him screaming. Leo fled too and bumped into the other two while Omar spent his time worrying.

When he wants to enter his room again, it turns out the other three were already in there, leaving him for yet again another panic attack. Then, he decides to man up and bursts through the wall. He accuses Jacqueline for stirring this when two NoBots enter the room as well. The four defeat one and they come across the puzzles needed to enter the Location.

After Jacqueline passes out and shows her side-effect, he grows worried once again. He needs convincing from Jacqueline to convince him doing his puzzle, and due to the risk it would have, decides to go last. The other three gather around the corner when Omar's side-effect sets in. They decide to enter when it has worn over.

Omar is split up with Aidan after the Autobalancing act. After this, his fate ends up being unknown. He is last seen in this state

. Archivist told him they made an enclosed room where they try to capture him still. If this succeeded, is unknown.

Later, Omar returns, firstly appearing to be jumping from 'island' to 'island' using his power as a boost. He initially appears as a a humanoid shadow, but after he jumps to another 'island', he turns into a skeleton creature.

Speculations about his past

Omar is said to not like his occupation and has not seen a family member for over a year. The more optimistic guess is that he was a soldier, seeing his origin (the Middle-East). His flavour quote at his civilian reference is 'I cut a deal'. In the military, deals are cut with some regularity. He is ironically enough terrified of fire, at least, used to be, which may root deep and can tie into this. However, the evidence behind this theory is fairly shaky as his hobby is graffiti. The more pessimistic guess is that he was a drug dealer or a thief, as it is said that the graffiti wasn't the only illegal thing he did, which may explain why he didn't like his job much. He might've been forced, as the previous link says: 'Not like he did many illegal things because there were scant other options'. His dearest memory was getting out of something. In the military context, it may be literal, getting out of a war front or a crashing building. In the dealer or thief context, it could be figuratively, like getting out of the grasp of a particularly nasty client, the police or even jail. His distrustful and paranoid personality explains itself in two ways: in the first option, it may be, together with his fear of fire and dislike of loud, sudden noises, the result of being traumatized, and the second option it could be a requirement for the job to be slightly distrustful, as trusting your client, partner or boss is very important to prevent them ratting you out. On another note, he's one of the ones who knew at least one superhuman prior and it's said he does a lot of running around, which may be because he would often have to run away from oppressors or the police if he got caught.

In the PMMM AU, he is a Puer Magi. His information sheet is to be viewed here. He is a rogue wrapped in mystery. On the image he is noted as a Prokaryote, as he is classified as one but lives rogue. He once met up with the Prokaryota (Jacqueline, Clara, Leonardo) but this 'left a bad taste'. It is unknown what exactly happened to have him this, however it is also noted he 'has an arrogant streak' and 'will not share Grief Seeds'. The exact conditions of this are not known. Although Puella and Puer Magi do not gain weapons while getting hit by a Cold Light, he is 'also seen using a naginata'. Why or where he got it is not revealed as well. He is one of the only ones whose information is partially censored; his Witch Type is '[REDACTED]'. Its Nature was previously '[EXPUNGED]', but as of June 30, 2019, its Nature is revealed to be 'Jealousy' as an apparent pun on the Japanese word for it (焼餅, yakimochi, contains 焼/yaki, meaning 'to burn').

The notes on Clara's reference reveal he frequently works together with her, and she 'calls on him' when she is bothered.

His wish before the Cold Light hit him, was: 'I’m screwed. So screwed.  When this Light hits the building, let it be so that I can escape and the evidence is destroyed.’ and is based upon the theory he was a criminal.

Omar in his civilian form. 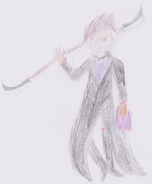 Omar as he appears in the PMMM fan universe, with the mentioned naginata.
Community content is available under CC-BY-SA unless otherwise noted.
Advertisement