Nightjar is a member of The Disharmonies, a subset of the notorious Third Network. She has the power of the Thermionic Dervish, granting her some unknown ability. She is apparently restrained by more levelheaded teammates from being an even bigger monster than she already is.

Nightjar's appearance is nothing like the bird she is named after; in fact, she is usually dressed in a red and blue suit. Her hair is black and white, (compare Miu Hanasaki and Kyuusaku Yumeno) and it is unknown if it's due to her power or if she simply likes monochrome colors and dyed her hair because of that. Her eyes also match the black/white red/blue theme, the right eye being black and blue, and the left eye being white and red. 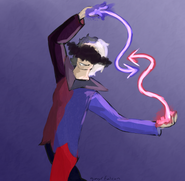 An imaginative depiction of Nightjar by gayrfalcon.

Nightjar's Puella Magi form. Note the duality present and the dual-colored Soul Gem at her belt.

Community content is available under CC-BY-SA unless otherwise noted.
Advertisement