Dancestor is the Mind Reamer.

Ibrahim Chakrabati, also known as Subject-002, is a member of the dancestor group who was previously held at the Location prior to the start of the story. He has the power of the Forest Viewer, granting him Axiom-breaching omnisicience.

Although he would be confused of him, Anders would not win in a fight against Ibrahim.

Ibrahim is a very plucky guy, sometimes to the point of childishness. However, he 'sees all' and he knows how to handle his potentially dangerous power. He is not to be angered, and is known to be able to crack skulls with his bare hands. It is also possible Ibrahim hypnotizes people via subliminal messaging, but he is usually not allowed to by his friend.

Due to his Cold Light, he is gifted with a powerful and mystic talent. He is highly attuned to his sense of intuition, not unlike Anders who also has an Axiom-breaching power, but in Ibrahim it is taken to a further extreme. His power is influenced by unconscious thoughts and desires of what is going to happen or already happened. He can have flashes of inspiration and prophecy, as he seems to have an awareness that transcends linear time. This kind of insight has allowed him to penetrate the veil of the Location (as Brother Dearest puts it) and this has left him kind of isolated from the rest much like Anders. However, he remains a particular affinity for his niece Jamila, who does not even know he's alive (and Ibrahim thinks this is probably for the better).

He likes puns, elaborate practical jokes and his hobby is playing impossible pranks.

Unctuous Scribe is one of the few people the Forest Viewer maintains any meaningful relationship with, he has explained the Symbol System to her.  It has been heavily implied that Ibrahim has romantic feelings for her, but he has not confessed them.

In the story Chiasmata

Ibrahim does not make an active appearance in the story, as he is confirmed to have already left the Location, but hints of his former presence is seen in the various texts scattered around on the walls, of which some can only be viewed when one alters the colors of the panel.

Ibrahim has knowledge of the ones who were entering the Location after him, as seen in his text

The walls of Ibrahim's cell appear to be the main medium of the blog, with active thoughts appearing in his signature green paint. White thoughts, theorized to be Ibrahim's subconsious, appear less noticably.

The knowledge of Cold Lights disturbed this Ibrahim slowly, ultimately leading to him ending up as a Subject in the Chiasm Syndicate of this world. His power breaches the Law of Cycles (Cammaerts Axiom). In here, he was blindfolded to prevent his power working subconsciously. Even now he is not anymore, he has a full-grown witch plus barrier in his head who are dormant and 'still pretty much present in his head though'.

As of 11-12-2019, his outfit has been greatly revised, to make it 'more seer/fortune teller-like' as the artist commented. It also features a veil, which he only takes off when around people who he is close to (currently, this is mostly Holly).

The way Ibrahim portrays his power.

Ibrahim as he appears in the PMMM fan universe. Note the location of the Soul Gem and its form. 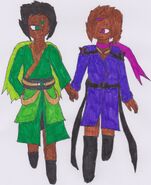 Ibrahim with his veil off.

I - The Magician
Community content is available under CC-BY-SA unless otherwise noted.
Advertisement