Dancestor is the Caustic Neophyte.

Holly A is one of the characters in the so-called dancestor group and also the assistent of Alice Hemsley. She has the power of the Unctuous Scribe, granting her creation of colored fluids and ink. She is the best friend of Ibrahim and possibly his lover.

Although they would get along swimmingly, she would beat Ash.

Holly is very kind and gentle, and with a certain level of demureness found in a true lady. She is not vain, but is instead rather creative. Holly is one to be loyal to her friends and help them wherever she can. Holly is the assistent of psychologist Susan Dachy.

She is, in contrast to Ibrahim who tries to cover up their relationship, not really a person to hide her feelings for long.

An anonymous asker said that Holly is possibly the least powerful character of the group, on which the author replied: 'How you dare call Holly non-powerful'. This might imply there is more to Holly than we have yet seen.

She likes hyperbole, and her hobby is painting and visiting alternate earths.

Holly A in the story Chiasmata

Holly does not make an active appearance in the story since she is a member of a group of characters who has left the Location prior to the start of the story. She is referred to once by Architect as 'someone who could fill your lungs with ink while gazing at you', slightly demonizing her.

Holly A in the ARG

Holly sometimes appears in the ask blog Ibrahim has, and is referred to time to time. She once took over an ask because Ibrahim fainted after being questioned about Cold Lights. She was first referred to as the Unctuous Scribe, then her name got called 'a kind of plant' before she got a full reveal. In here, Holly writes in cursive, in her signature bright pink tint.

She is called 'Holly Anderson' in the AU. Persumably, she is still Ibrahim's friend.

She types a few lines in the memo. First off, she notes that she wants to participate in Ibrahims plan, but she gets angry upon scrolling up and finding out he has been posessing Knight Vitreous to make the memo. He then bans her.

As of 12-13-2019, her outfit has been greatly revised. The author said that they 'greatly uprooted her aesthetic' and 'based it off the painter's jacket [they] always wear'.

Her power as portrayed by Ibrahim. 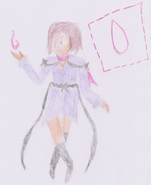 Holly A as she appears in the PMMM fan universe.
Community content is available under CC-BY-SA unless otherwise noted.
Advertisement