An employee of the Chiasm Syndicate, as well as their Subject-003. She is one of the highest ranking superhumans in the Syndicate. She is often tasked with following Subject-002. Geist is often used as an assassin and spy, with the ability to censor herself from others perception.

She likes to sneak up on people and hug them, apparently a surreal experience due to her inability to be fully perceived.

Inquisitor is notably disdainful of her. 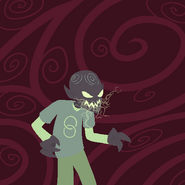 Geist in a pallette challenge.
Community content is available under CC-BY-SA unless otherwise noted.
Advertisement