Cindersoul is an excessively dangerous superhuman responsible for turning a large portion of the American Southwest into a glassy desert, called 'the Snowdome' for irony. They are an F-rated threat, and a genuine malice for the others.

They are responsible for killing Hieronymous.

The reason why they are angry, is because they know they can't change anything.

In the PMMM fan universe, Cindersoul is also counted as a major threat. The Benefactor's League was responsible for stowing them away into the desert after they 'met their insane ways'. It is yet unknown how this meeting exactly went. They are 'a veteran, for sure', which indicates that they have been a Puella/Puer Magi for very long and they are not a Witch (yet).

Their redesign was fairly minimal, as some colors were switched around and changed. 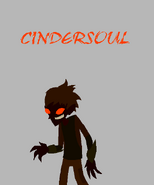 A very early version of Cindersoul.

The Castle Cat named after Cindersoul.