Dancestor is the Velocity Tinkerer.

He and Daniel would argue a lot, but not mind eachother. However, in a battle, Breach Cutter would win.

Not much is known about his character since his goal is 'fairly spoilery'.

He likes satire, and his hobby is writing.

Breach Cutter usually wears a white lab coat with the symbol of the Chiasm Syndicate on it. Underneath that, he wears a blue vest.

His role in the story

Breach Cutter does not make an active appearance in the story since he belongs to the group of people who has already left the Location prior to the start of the story. However, various NoBots have used his powers to gather the LUCA group for a second regroup.

He is called 'Carlin Amaral' in the PMMM AU. He persumably still works for the Chiasm Syndicate since he is called 'Interface' on the reference. His magical form is based around a sailor uniform (mainly the collar).

Breach Cutter was the only one in his group who was not granted a redesign as of 2020/early 2021. Instead, the design merely got adjusted to the new medium of the artist.

His power as portrayed by Ibrahim.

Breach Cutter as he appears in the PMMM fan universe. (slightly outdated) 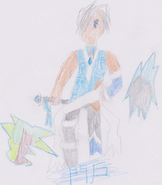 A more clear look of Breach Cutter's magical form. In this image he is seen wielding an unknown, wand-like weapon. (slightly outdated as well)

No direct redesign, only a slight adjustment.
Community content is available under CC-BY-SA unless otherwise noted.
Advertisement